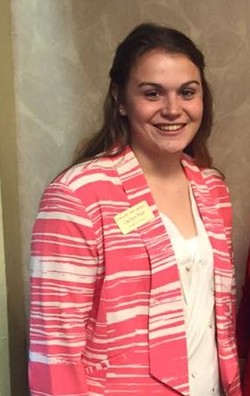 Caitlyn S. Pool Caitlyn Pool of Robesonia, Pa. and Kathryn Osborne of Millerstown, Pa. were selected to receive the 2015 Arthur W. Nesbitt All-American Dairy Scholarships. Pool and Osborne were selected from a diverse field of applicants from multiple states.

“The third class of scholarship applicants participated in youth education activities -- both in and out of the showring -- during past All-American Dairy Shows, are from diverse geographic backgrounds, and are pursuing diverse educational plans and career strategies that range from production, veterinary medicine and research to communications and ag education,” said Bob Heilman, AADF executive director. “The achievements of these two scholarship winners is from a very select class of participants who are already proving themselves to be young dairy leaders.”

Pool attends Penn State University, majoring in animal science, where she is an active member of the Dairy Science Club. She has plans for a career in public relations and communications “educating the public about dairy” and a desire to return to her family’s Fantasyland Holsteins.

Pool has exhibited at the AADS Premier National Junior Show and has been an active junior member of breed associations, including Holstein, Red and White and Jersey, as well as 4-H and FFA. At the National Holstein Convention in Illinois recently, Pool was a Distinguished Junior Member semi-finalist, recipient of the 2015 National Holstein Women’s Scholarship and second place in public speaking on “Apps… they make the dairy world go ‘round.”

Kathryn A. Osborne
Osborne attends Wake Forest University as a biology major with minors in chemisty and Spanish. She plans to go on to Veterinary school in the area of research with a focus on mastitis prevention. Her mastitis research, which began as an FFA agriscience project when she was a freshman at Greenwood High School, has already had a positive impact on the dairy industry.

Osborne has exhibited at the AADS Premier National Junior Show and participated in youth leadership roles as a member of junior breed associations, including Holstein, Red and White and Jersey, as well as 4-H and FFA. At the 2015 National Holstein Convention in June, Osborne was named a 2015 National Holstein Distinguished Junior Holstein Member. She was also the 2013 National Winner of the Agriscience Research and Animal Systems Proficiency Award at the 86th National FFA Convention in Louisville.